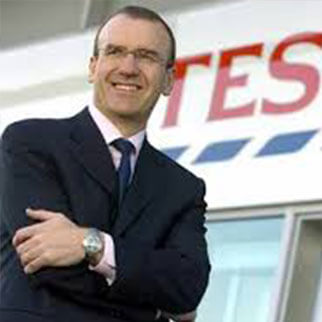 Sir Terry Leahy is the former CEO of Tesco and one of the most admired business leaders in the world.

Knighted in 2002 for his services to food retailing, Sir Terry is well known for successfully turning around Tesco to become the largest chain in Britain, transforming the country’s supermarket industry. At its peak, £1 in every £7 spent in UK shops was spent in a Tesco store.

Experts credit Leahy’s success to his hands-on style and marketing prowess. Leahy however places focus on experience and low-key leadership as described in his recent book ‘’Management in 10 Words’’.

Below is a copy of Sir Terry’s recent interview with Adam Bryant from the New York Times.

Q. Do you remember the first time you were somebody’s boss?
A. I joined Tesco pretty much right out of college. And actually I turned down my first promotion because I didn’t think I was ready to lead.

Q. That’s surprising.
A. It was a tiny marketing department in Tesco, with just a few people, and we were crunching data. A senior guy found me buried under all these reports and obviously saw something, and he eventually suggested that I lead the department. I turned it down. I’m by nature a shy person, and I’d never had any responsibility, and I was daunted by the thought of it. But the next time he asked me, about a year later, I said O.K. I figured I can’t keep saying no; it wasn’t really that I suddenly felt I was ready.

Q. So what was your approach once you started managing people?
A. I suppose the contribution I made was energizing people by setting an objective and making a big personal contribution toward that objective. The other thing was probably that I always had an innate sense of justice and fairness, so I probably treated people O.K. Because I’m a little introverted, I’ve never had personal favorites, so people always felt that they’d be treated the same as anybody else.

Q. Tell me about how your leadership style evolved over time.
A. I became C.E.O. at 40, and I wasn’t ready for that, either. My background is working class, and I had no sort of natural authority. But, compensating on the other side, I had a lot of energy. It also turns out I was pretty innovative. I always had ideas about how things can be made to work better.

Q. What were some leadership lessons you learned along the way?
A. When I joined Tesco, somebody said to me, “They’ll eat you alive,” because it was known as a bit of a hard-charging place. That sort of brought out the street kid in me, and made me a little bit hard and combative. I had to learn later that there’s another way to get the best out of people, which is to really motivate them and make them feel good about themselves. So I changed. I like to think that was closer to the real me anyway. I like to motivate people. I’m not political. I don’t hold grudges. Later on, I tried to codify for the company how people should behave, and what kind of treatment they could expect from others.

Q. How did you do that?
A. Before I became C.E.O., I got all Tesco people together in small groups — it took over a year — and asked two questions: “What do you think Tesco stands for? And what would you like it to stand for?” That was the more revealing question because of the golden rule of treat people the way you’d like to be treated. They were prepared to dedicate themselves to service, but they wanted a culture that was respectful and provided dignity for people. It was amazing how simple it was and how it coalesced around these two pillars of service and good manners.

If I had to sum it up, it would be about being generous at work rather than selfish. It is amazing how often you see people who can’t help themselves — because of their ambition or their insecurities or whatever — and that they’re basically selfish and they take out rather than give.

For some people, that’s a transition that they have to make, and not everybody can make it. Sometimes the brightest find it the hardest to make that transition because they’ve always been better than the people around them. They find it hard to trust the people around them to do the work. They think, “Well, I know best.” When you see organizations that struggle, it’s mainly that people can’t trust. The leaders can’t trust, and then the teams don’t trust each other. You have to create conditions where people can work together because they trust each other, and that really empowers the organization.

It also has a lot to do with making people feel good about themselves. Bureaucracy will tend to lower self-esteem, so if you consciously build people up so that they say, “I matter here and people respect me and they think I can contribute and they trust me to contribute,” that really gets the best out of people.

As a leader, I never expected people to like me, but it matters if they trust you or respect you. I think that’s mainly around consistent behavior. If you treat one person differently from another, or if one day you’re different than the day before, then it’s really hard, because they don’t know where you’re coming from. People have to know that. And you have to be a winner. It’s hard to maintain trust in someone if they ultimately are not successful. You have to get enough right.

Q. What are some other ways that your leadership approach evolved?
A. When I was younger, my desk would be perfectly tidy and I had the whole week structured and knew exactly what I was doing. I was the model young executive. Then it shook me that even with all that control and focus, the business still hit problems, and I realized I wasn’t seeing the forest for the trees. After that, my desk was always a mess, even when I was C.E.O., because I actually concentrated on a few things that were important.

Q. What advice do you give college graduates heading into their careers?
A. What matters is what you cause other people to do rather than what you do yourself. And just do your job. Don’t manage your career. You have to trust that people will spot you doing something well. One problem young people have is that they don’t trust bosses to see that they’re doing a good job. So that unsettles them, and they start to try to manage their own career and progress rather than just doing their job really well and having faith that people know to spot them.

Also, people should just enjoy their jobs more. I saw so many people who were unhappy in their career because they never actually innately enjoyed the work they were doing. They were so worried and concerned about getting promoted.
To enquire about speaking engagements for Sir Terry Leahy in Australia, please contact Keith Harwood at Inspire Speakers.

About the author: Keith Harwood is Managing Partner of Inspire Speakers, providing companies with inspiring keynote speakers, expert trainers and professional MC’s for their training programs, events and conferences. Please connect on 0450 077 997.