Founder of KeepCup
Categories
Other info

“When Abigail Forsyth first started developing the KeepCup, she thought it would be “a nice little project” to have on the side while she raised her children. Four years later, the KeepCup has ...”

When Abigail Forsyth first started developing the KeepCup, she thought it would be “a nice little project” to have on the side while she raised her children. Four years later, the KeepCup has become Australia’s leading reusable barista standard coffee cup, distributed by many of Australia’s biggest names in coffee and launching into markets worldwide. Her humble plans, it seems, have taken off beyond even her most ambitious dreams.

“It’s like a tank rolling toward you,” she says, “Unless you climb in and start driving, it’s going to run you over.”

Abigail’s entrepreneurial spirit was kick-started when she caught sight of opportunity as an eleven year old, selling sandwiches in the business park where her father worked in the school holidays. Profits and losses were accounted for, Abigail recognised a need she could satisfy and got a taste for the relationship between effort and reward. With delights like peanut butter, honey and apricot sandwiches well received, there was delight in others appreciation of a creative idea.Following a Law and Arts studies at the University of Melbourne, Abigail worked as a solicitor for a boutique law firm in Melbourne. During this time Abigail regularly volunteered at the Immigration Advice and Rights Centre (IARC) a not-for-profit charity, giving legal advice to refugees and immigrants to Australia.

In 1998 Abigail left the law to start up Bluebag – feel good food, a chain fresh and healthy sandwich shops in Melbourne’s CBD, with her brother Jamie Forsyth. The move meant the uncovering of Abigail’s creative flair in the store design, menu and packaging. Bluebag operated six stores and a thriving corporate catering business. During this time Abigail commenced an MBA at the University of Melbourne but found practical matters always drew her away from her studies.

After twelve years the business was sold in 2010, having provided the idea and stepping stone for her latest venture, KeepCup. The large volumes of disposable packaging and waste alarmed Abigail, so the search began for more sustainable and environmentally gentle ways to serve food. Abigail saw an opportunity in the inadequacy most reusable mugs or thermoses to replace disposable cups. They set about designing KeepCup as a product response that would inspire and assist in the behaviour change from discard to reuse.

“We took a big gamble that usability and aesthetics were key reasons for the poor take up of reusables as an alternative to disposable cups. As a global problem we always had our sights set on a global brand. People purchase KeepCups to be sustainable but they keep using them because they love the way they look and feel“ says Abigail.

As co-founder and spokesperson for the brand it has been a wild ride. In four years over three million KeepCups have been sold from Australia to Iceland. KeepCup products are designed and manufactured in Australia and exported to the world, and KeepCup has offices and warehouses in the USA and the UK, and 25 global distribution partners. KeepCups are sold in 32 countries around the world. Positive word of mouth has turned the world’s first barista standard reusable cup into a global phenomenon. In Abigail’s words, “KeepCup is a simple product whose thoughtful design and clever marketing has given people permission to do the right thing”. However with an estimated 500 billion disposable cups manufactured annually there remain significant challenges ahead.

Abigail lives with her husband and two children, Bess and Clarence. She loves her garden and before KeepCup she was a good cook. 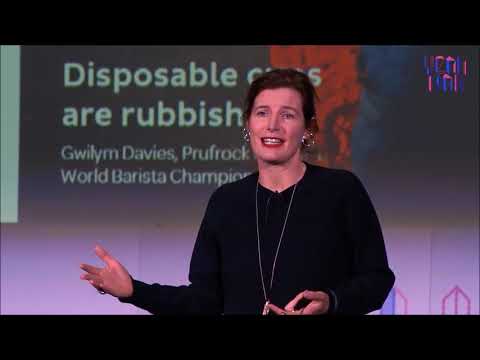